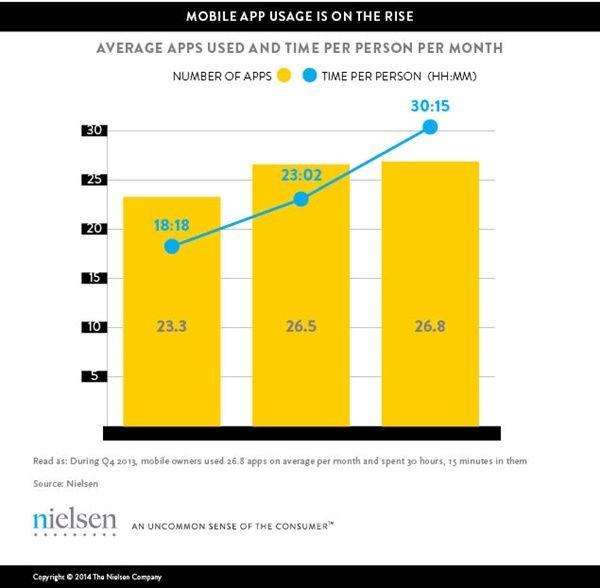 Nielsen report: time spent on apps continues to grow, but their number – not necessarily

Currently, users of iPhones’and Android phones can use a total of more than one million apps available on Google Play and i Tunes App Store. According to Nielen's latest research, however, it turns out that despite such a plethora of apps, we have been using an average of 24 apps per month for several years, even though the time spent on them has been steadily increasing.

Users are using On average, from 24 apps per month – This is according to the latest Nielsen report. Only, or as many as 24? In dedicated stores, the sum of apps is more than one million – however, there are far fewer of these leading, well-executed apps, while hundreds of thousands are apps that are downloaded drastically infrequently, and even if they are, they are uninstalled as soon as they first launch.

The number of 24 apps used per month is almost constant and has not changed drastically for several years, despite the continued growth of the mobile industry.

Such survey findings are certainly a good sign for apps that are A must-have for most of the users – primarily apps from under the Google and Facebook banner, as well as for email, map or weather apps. Must-haves’y from big companies and the power of user habituation certainly make things difficult for start-up apps that are just setting out to conquer the market. It's not that they are without a chance – often they just have to rely on luck, such as the. Yo's absurd app, breaking records of popularity. 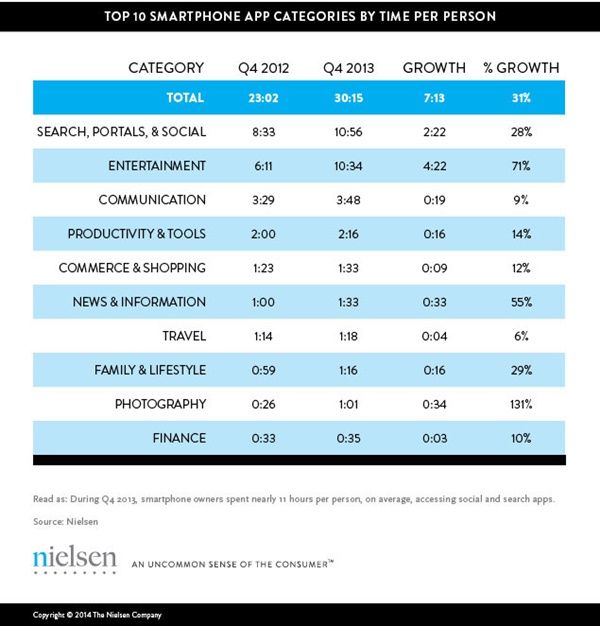 Nielsen surveyed U.S. adult users of iPhones’and Android phones. The study found that time spent using mobile apps continues to grow – over the past 2 years, the amount of time spent using mobile apps has increased by 65%. In the last quarter of 2021, users spent monthly 30 hours and 15 minutes on using apps. In 2011, the figure was 18 hours and 18 minutes. Despite such a dramatic increase in the amount of time spent using apps, the sheer number of apps that users use has not changed much – in 2011 it was 23.2 applications per month, in 2021 – 26.8 appsi.

Nielsen says that such survey results show a certain limit to the apps that users can actively use on a monthly basis. While the number of apps we use is not changing, the apps themselves are certainly changing. Some we uninstall, others we install, in view of which there is a kind of constant rotation on smartphones.

Younger users rule, but older users are not idle 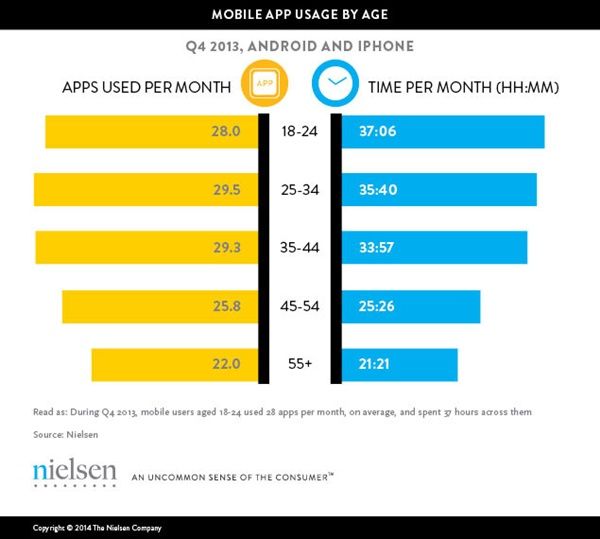 It turns out that users spend the most time using apps for search, browsing and social networking. Compared to 2021, a large increase was recorded by apps in the category of photography – over the course of the year, they saw as much as 131 percent growth in terms of time spent using apps. A large increase was also recorded by apps in the category entertainment (71%) and news and information (55%). The study also found that the amount of time spent using apps decreases with age, as well as the number of apps themselves.

This is probably related to the lower rate of smartphone adoption among older users, although nevertheless the statistics for the 55+ group may surprise – they use an average of 22 apps, spending 21h 21min per month on them. The most time (37h 6min) is spent on apps by 18-24 year olds, and of the largest number of apps (29.5) users aged 25-34.

Have you ever wondered how much time your smartphone devours? You devote one day a month to it, or maybe you think it is definitely less or more? Share with us also the number of apps you use regularly – we are curious if Nielsen statistics are also reflected in Polish realities.