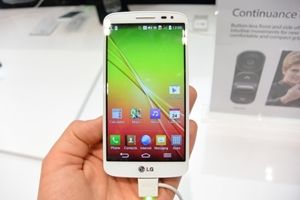 Mobile World Congress 2021 is slowly coming to an end. With each passing day, the number of launches and significant events diminishes, as the biggest gems were unveiled at the very beginning of the event. So today we bring you launches that have been a little quieter, but we still consider them noteworthy.

We haven't written about LG devices at Mobile World Congress so far, while the company unveiled some really interesting models. First, noteworthy is the all-new LIII series, which includes models of L40, L70 i L90. All are running on the latest Android 4.4 KitKat. A new feature is the screen unlocking system – KNOCKcode, which works on the principle of a memorized sequence of 2-8 taps.

The numbers next to the LIII series models are the equivalent of their "place in line". The cheapest and smallest is the 3.The 5-inch L40, with a dual-core processor 1.2GHz and 512MB of RAM. parameters quite decent, and the price is encouraging – 500zł. The second model, the LG70 has a screen of 4.5 inches, the same processor as the L40, and 1GB of RAM.

Huawei at Mobile World Congress unveiled two new tablets from its MediaPad lineup. MediaPad X1 is essentially a phablet, as we can also make phone calls through it. The tablet has a 7-inch display with FHD resolution. It runs on Android 4.2 Jelly Bean.

What sets the MediaPad M1 apart is its aluminum casing.
Huawei also unveiled a wristband TalkBand B1, Which is a dedicated addition to the MediaPad X1 tablet. It is primarily used for making phone calls. It is compatible with devices running on Android as well as iOS. In addition to facilitating communication, the armband also supports sports activities – it records distance traveled, calculates calorie balance, and has a pedometer function. New from the smartphone category is the model Ascend G6.

It features a very slim design. The smartphone features 4.5-inch screen. It is equipped with a quad-core processor of 1.2GHz, 1GB of RAM and 8GB of internal memory.

BlackBerry will release another flagship

We already wrote about BlackBerry's launches yesterday. The company's CEO, John Chen, announced that BlackBerry will soon release another flagship smartphone, possibly later this year. Chen is currently struggling to rebuild a stronger position for the company in the market and wants to regain the trust of customers.

It believes that the main way to do this is to produce a phone that existing loyal fans of the brand will love, as well as new customers.