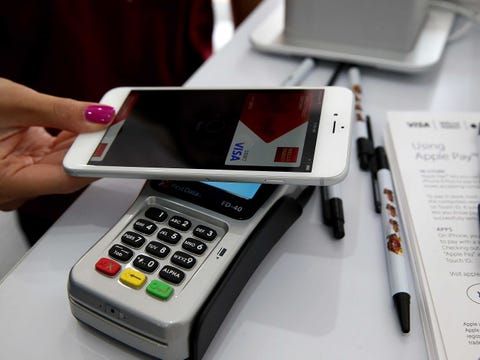 Mobile payments on the iPhone: Apple is teaming up with American Express, Visa and MasterCard

Apple signs partners to bring mobile payments to iPhone’a. Apple has already established partnerships with Visa, American Express and MasterCard. As early as September 9, details of the new payment system are likely to be unveiled.

A special Apple event will be held that day to unveil the new iPhone 6 and, most likely, the first wearable device from Apple.
Apple began building relationships with Visa in late July. American Express and MasterCard have recently joined this collaboration on a mobile payment system. The main goal of implementing a mobile payment system is that the latest iPhone 6 can replace users’ credit or debit cards. So the iPhone will be able to replace the card during contactless payments.

It involves the introduction of a module NFC for Apple devices. Thanks to agreements with the three giants of the U.S. payments market – American Express, Visa and MasterCard, iPhone’s payment has the potential to largely replace traditional payment cards. However, the idea is not without flaws and concerns.

Some concerns may be the safety of directly linking your finances to your iPhone’m. However, Apple will probably do its best to make mobile payments at least as secure as traditional card payments. There is a likelihood that Apple will tie the mobile payment system to Touch ID technology, i.e. the fingerprint scanner.

Apple’s mobile payment system itself is likely to meet with a lot of enthusiasm from users, who are eager to replace their wallets with the iPhone’s service. However, the problem lies not only with users’ confidence in the mobile wallet. Just using the iPhone’m to make payments may be severely hampered due to vendors. Many stores still do not have devices that allow contactless payments using NFC technology.

The introduction of such readers adds quite a bit of cost to retailers. So why a mobile wallet if you will not be able to use it?