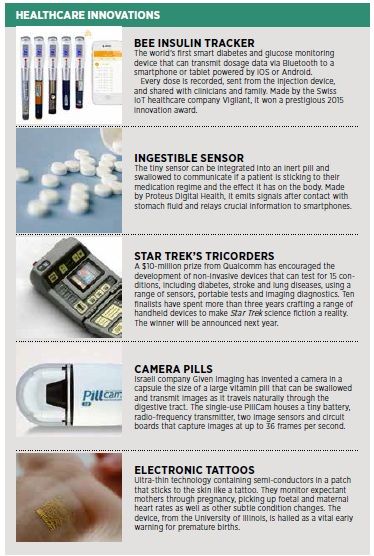 The development of the Internet of Things (IoT) is able to offer patients around the world a very convenient treatment for many conditions, and is undoubtedly an opportunity for people who want to take care of their health and have more control over it. Devices belonging to the wearable technology division have, until recently, been used most often to monitor exercise and thus improve physical fitness. It’s not a long way from that to good health, so there’s an opportunity to go one step further and use new technologies to monitor the body’s health or predict diseases – this is the domain of m-health.

Concern for health or business?

Technological solutions in medicine, or more precisely, in health-promoting activities, are not only an opportunity to change the market, but also to enrich themselves. Cisco predicts that IoT could generate some £48 trillion in profits for the economy over the next decade. The data is attracting a lot of creative technological minds from around the world, led by the biggest, such as Apple and IBM.

An important element of technological development in the medical field is that it has the potential to convince and encourage people to take responsibility for their health and make changes in their daily lifestyles. It’s hard to answer whether health or business is more important in IoT development. I think it all depends on the point of view and the approach of the person or company in question.

Few people are expected to do such a huge amount of work charitably, but in designing advanced solutions it is still possible to introduce an element of selfless help, such as. In the form of temporary test programs for a select group of people. This can both help patients and, in the future, increase the turnover of the company producing specific devices. A group of technological minds from Barcelona came up with such an idea.

The project carried out in Barcelona involved installing a smart network hub connected to a WiFi network in the home of sick people. It was designed to monitor patient behavior and activity and send reminders to take medication. All data also went to the patient’s doctor.

Thanks to this project, there has been a 20 percent drop in emergency calls, and homeowners have been able to enjoy the time saved, which in the absence of these devices would have been spent on medical consultations or getting to the hospital.

Personalization is the key to success!

Dr. Shahid Ali, a professor at Stanford University, says people who were enrolled in a health program supported by the new technology reduced their blood pressure in about three months. This proves that putting control of their own health in the hands of patients makes them care more about themselves. Personalization of services and messages to potential users is the key to success. Therefore, one should see in medicine a huge opportunity for IoT development, and in patients – supporters of technological solutions.

The solution will have mutual benefits. Patients will begin to take more care of their own health, and hospitals and medical facilities will save money, as digital medicine generates much lower costs. On the other hand, however, the m-health industry could be no small threat to traditional facilities.

The increasing popularity of the Internet of Things and devices that help monitor our health could weaken the position of hospitals or clinics and, as a result, weaken them. As you can see there are two sides of the coin of the thriving development of m-health – on the one hand helping hospitals and reducing the number of patients with less serious conditions and the ability to control their health on their own, on the other hand – controlling on their own may soon reduce the desire of patients for traditional medical visits, while even the best technology will not replace contact with a doctor.

Will it be effective?

The effectiveness of the Internet of Things will be determined by the quality of the data collected, as well as both the sophistication of the new devices. IoT is undoubtedly enriching the database, so with the development of this field, you will also see a change in the quality of services. It is important that technological developments do not occur in isolation and do not replace the medical consultation, but are a link between the patient and the doctor.

The use of technology in medicine is undoubtedly increasing. Emails from and to patients, videos containing the diagnosis and patient history are becoming more and more popular. But nevertheless, the pace of change needs to accelerate, because it can help reduce the time to provide help, and thus – reduce overall mortality rates.

Bee Insulin Tracker is the world’s first smart device for monitoring diabetes and blood glucose levels, which transmits data via Bluetooth to a smartphone or tablet. It is supported by Android and iOS systems. Every dose is recorded and sent to both the doctor and the patient’s family.

It was created by Swiss company Vigilant, and this year it received a prestigious innovation award (2022 CES Innovation Awards Honoree).

Another idea is swallow sensor produced by Proteus Digital Health, after contact of the pill with the stomach transmits data and information to a smartphone. This would be an extremely useful method, in a situation where we take a lot of drugs or have been taking them for a very long time. It would certainly facilitate „monitoring” of pills taken.
Israeli company Given Imaging, on the other hand, has come up with an idea to put camera in a pill, which, when swallowed, transmits an image of the “journey” through the digestive tract. This single-use pill is equipped with m.in. image sensors that capture 36 frames per second.
Also innovative are ultra-thin semiconductors, which originated at the University of Illinois. They come in the form of electronic tattoos and perform a very useful function. We’re talking about micro devices that allow moms-to-be to monitor both their own and their baby’s health.

The signals that this small subcutaneous tattoo picks up are the fetal and mom’s heartbeats and other, even the subtlest changes in the health of both mother and baby. The device has been found to be extremely helpful in warning of premature births.
All of these solutions are undoubtedly a huge technological, but also health-promoting achievement. Just a dozen years ago, no one would have thought that a small “patch” on the skin that looks like a tattoo or daily swallowed capsules would replace GPs’. These devices are capable of transmitting real-time patient health data.

Further development of the Internet of Things could significantly revolutionize the treatment process and the collection of patient data, but it could also introduce a fad to be fit – for a change of fit.
Source:
http://raconteur.net/technology/can-the-internet-of-things-help-power-a-health-revolution