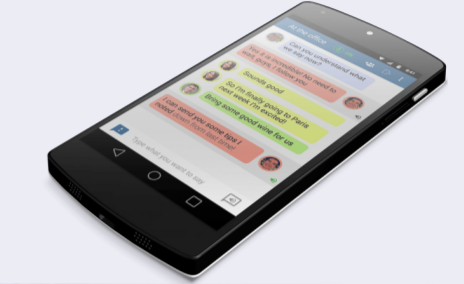 Transcense – an app to help deaf people participate in conversations

Mobile technologies are increasingly reaching out to people with disabilities. Developers of mobile solutions are making increasing efforts to make life easier for such people. After all, a smartphone is a device that everyone almost always has with them – so why not use its potential just like that – helping? An app project has appeared on Indiegogo to help hearing-impaired people participate actively in society.

The project has raised 25% of the required amount in just 2 days!
A project has appeared on Indiegogo that aims to help deaf and hard-of-hearing people interact with others. Speaking of Transcense. It’s an app that aims to allow deaf people to participate in group conversations on the fly – Both at work and in private life, when a deaf person is unable to follow the pace of a conversation.

How it works? The application asks for access to the callers’ mobile devices, using the microphones of their phones. Transcense uses the most advanced voice recognition technology. A record of the conversation in progress is displayed on the deaf person’s device almost in real time, with only a minimal delay. On the screen appears not only a transcript of the conversation, but also a color distinction for each caller, which allows a person with a disability to easily distinguish one issue from another.

Thanks to such a solution, a deaf person does not have to feel uncomfortable and does not have to be excluded from certain conversations and meetings. Transcense also takes care of deaf people – by entering text into the app, the application can “speak” on their behalf or communicate to callers that it would like to speak in a discussion. The app itself is developed by people who are deaf or have direct experience in this matter – the main originator of Transcense was born into a deaf family, and one of the co-founders is completely deaf.
Transcense is looking to raise $25,000 via Indiegogo. At the moment, the idea has been supported with a total of nearly $6,500, which is already 26% of the cost coverage – such an amount was raised in just 2 days! There are 29 days left to complete the fundraising, so if the pace is maintained, the initiative will succeed even before the planned end date.

The goal is truly laudable, as Transcense gives hearing-impaired people, who make up 5% of the world’s population, a chance to connect with the outside world almost anytime, anywhere – all they need is a smartphone with them. The app can also help the older generation, with as many as 40% of people over 65. One year old suffers from hearing impairment.
We also remind you that USA, too, is using mobile solutions to help people with disabilities. We can be proud of the “Virtual Warsaw” project, which won an award in the 2021 Mayors Challenge competition. The goal of the project is to use iBeacons in such a way as to help blind and visually impaired people navigate around the city and government offices.

We hope that more and more mobile solutions will be created both in USA and around the world, which will allow people with disabilities to improve their quality of life.