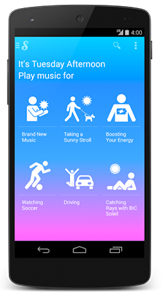 Google buys streaming service Songza, following in the footsteps of Apple and Beats

In May, Apple purchased Beats for $3.2 billion. Google has clearly followed in Apple's footsteps, deciding to buy Songza – a music streaming service. The amount of the transaction has not been disclosed, although amounts in the $6 range are said to be involved.7 to as much as $39 million.
Songza is a music streaming service. We will likely see the effects of Google and Songza's collaboration in the service Google Play Music and possibly also in the service YouTube. Songza will still remain an independent application. The scope of Songza and Beats Music is very similar, with both services offering playlists based on criteria such as mood, location or activity. Songza, however, introduced this service much earlier than Beats, back in 2010.

The mobile app was launched a year later and is now up from 5.5 million active users. Songza is also distinguished by its unique playlist creation – music suggestions are not the result of algorithms, but the work of music industry people.
Google Play Music currently offers playlists based on users' musical tastes, based on the songs they themselves initially chose. All this happens based on software algorithms. Songza works in a different way, offering music arranged in playlists that have been created by other users, including music industry professionals.

Other services rely primarily on algorithms rather than human experience, which is what sets Songza apart from other streaming services.
Although the amount of the deal has not been disclosed, various sources speak of amounts in the range of from $6.7 million (that's how much, at the moment, is the sum of the amounts that other companies, including Amazon, have invested in the service), Through $15 million, up to $39 million, Which states The New York Times. There is also a likelihood that other companies will join the fight for Songza, which will increase the price.